1.) The waveform looks “loud” peaking near zero dB scale simply because it’s already mastered.
2.) There are peaks and valleys on the waveform. These are the songs separated by silence or gaps.

Characterization of Mastered CD in Details

CD length at the start

This is usually set by the mastering engineer and not dictated by the red book CD standard. The silence before any song would start. More details later.

2.) 3 second total silence/ gap per song. But in the tutorial how to make a CD master that complies with red book CD audio standard; there is a 2 second minimum gap in between songs. So this extra one second is a combined silence between the ending of the song and the silence before the start of any song. You can picture it this way:

break down of gaps

The above screenshot assumes that the mastering engineer leaves a 0.5 second gap after the end and the start of any song. Thus:

4.) This is the volume statistics of the mastered CD: 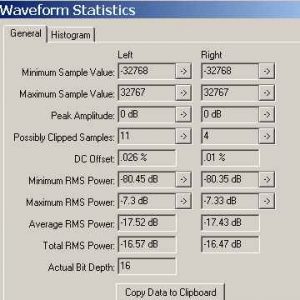 The following are some interesting information based on the volume statistics data.

a.) The average RMS level of the entire songs in the album is only around -17.5dB. Now comparing this to modern CD, this is very low. But this album is done mostly from the 80’s with some songs released in the 90’s.

b.) The actual bit depth is 16-bit and are two channel tracks, implying stereo.

c.) Also the peak amplitude is 0dB; this means the entire dynamic range of the CD has been fully utilized. Since 0dB is the maximum digital peak, while the average RMS is way down at -17.5 dB, implies also that this album is not participating the infamous loudness wars and that it contains a lot of nice sounding dynamics. Below is a sample snapshot of one of the album songs showing the high and low peaks indicating high dynamics.

nice dynamics of the song