The implementation for RAID 0 and RAID 1 method can be visualized below: 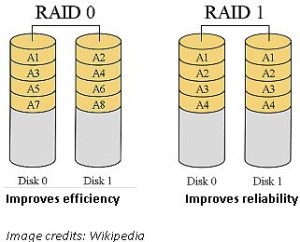 As what you can see, both RAID 0 and RAID 1 uses a minimum of two hard drives for each setup. In RAID 0, two physical hard drives appear as one logical hard drive. The computer stores different data in both hard drives that can be accessed in parallel. Because of this parallel operation, it improves bandwidth and makes the storage process more efficient. The obvious downside of RAID 0 is where one hard drive goes down and it can take down your entire system without any means of immediate recovery other than the external backups.

RAID 1 is a mirror storage system. Two physical drives storing exactly the same information/data. But this would also appear as one logical drive to the system. The main obvious benefit would be increased reliability because of data redundancy (same data in both drives). If one drive fails, the data is still preserved on the other drive and the computer still continues to operate. You can then add a new drive without any loss of data in the event of storage drive failure.

So which storage setup is optimum for DAW? – Recommendation

Anyone knows that for a DAW to perform at its best it needs to be super-fast and quiet. So it appears that SSD is the most recommended data storage technologies for a modern DAW. It has very low access and seeks times that allow faster data transfer. The absence of mechanical parts makes the SSD quite during the operation.

Therefore, it seems that the optimal setup for DAW storage would be using hard disk drive with SATA interface. Look for the fastest/big capacity SATA drive available in the market paired with modern motherboards that supports the latest SATA speeds. This setup has good cost to benefit ratio as of year 2012. This implies your building cost is low while you still have the benefit of having a fast data transfer and capacity that you need for audio recording.

If PC is well optimized (one dedicated hard drive for OS and one additional hard drive for recording/data, details here: “Windows XP/7 Audio Recording DAW Tweaks & Optimization Tips“) you can have a low cost DAW that is fast and reliable.

RAID 1 storage to enhance reliability/protection of recorded digital audio and sessions might be a very nice feature. But this is not strongly recommended for first time DAW builds as it means adding cost and complexity.

You can consider having a RAID 1 setup if you thoroughly understand on performing and managing RAID setups. This can be complicated for a DAW beginners converting their PC into a recording studio.

With or without RAID, it’s important to have an incremental backup solution like Norton Ghost to make periodic backups for your DAW project. You can read here for some back up tips here.

SSD for DAW as of 2012 is still not yet widely accepted. But there might be time in the future where this would become a new standard for digital audio storage replacing hard disk drives. Only when its price would be lower and the technology would now become very stable.