b.) Use the plug-in as often as possible in your projects and never switch to another plug-in. This will allow you to know how the plug-in sounded like with your experimented settings.

3.) Upgrading DAW to a more recent versions – be careful with this. This is not to say that I am not in favor of updating DAW. Yes updating it is important to get the latest bug fixes and security patches. However, you need to be aware of the following:

a.) Upgrading DAW sometimes introduces or removes important features that you always use in the previous version. If you upgrade; you will face a lot of issues with respect to usability of the software.

b.) Upgrading DAW can probably make some of your plug-ins to be incompatible with the latest version. So if you are a big fan of plug-in “X”; it may not work anymore and you will be forced to learn and use a new plugin which can take some time.

Here is my recommendation if you find yourself confused whether you will upgrade your DAW or not:

If there are changes that can affect drastically on how you are normally using the software; then think twice before you upgrade.

b.) Read the recent reviews and ratings of the latest version of your DAW software. For example, in year 2005 I have Adobe Audition 1.5 installed in my PC; then came Adobe Audition 2.0 and more recent versions. However according to my own personal assessment; I find them very difficult to use because a LOT of changes have been made. So I simply stick to Adobe Audition 1.5.

Use the BEST of BOTH worlds

Some audio mixing engineers often record, mix and master in one DAW software. However if I encounter a multi-track or multi-channel project that require very low latency; I will record the tracks in Reaper.

For example; my audio interface is Saffire Pro 40 which is an ASIO device and can record simultaneous inputs then I will use Reaper to record the tracks.

But I cannot mix perfectly in Reaper because I still have to read a lot of documentations regarding its usage; so my solution is to import the 24-bit/96KHz or 24-bit/48KHz track to Adobe Audition 1.5 and then mix it there using the plug-ins I know for more than 5 years. 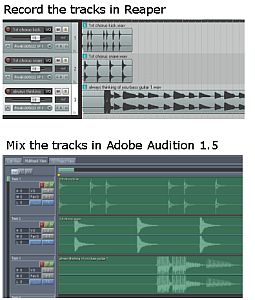 Record the tracks in Reaper and Mix in Adobe Audition