This is the code:

It says that it will use PulseAudio as the default sound server for applications using ALSA when its running. It will then execute the pulse-alsa.conf that contain this code:

Thus confirming the root cause of the problem. The above code shows that ALSA output is routed to PulseAudio instead to JACK sound server.

The Solution: Disable and Uninstall PulseAudio

Since its confirmed that PulseAudio is interferring the routing from ALSA to JACK, then it needs to be disabled/uninstalled completely.

1.) The simplest way to uninstall is using Ubuntu software center, type “pulseaudio” then select on and click “Remove” – then click “Remove all” to include other dependencies.

2.) Make sure you have turned on your firewire audio interface as well as the monitors/speakers.

3.) Although not necessary, I suggest a restart of your system by entering this command in the terminal:

4.) After the complete restart, launch a terminal and start the ffado dbus server, enter this command:

5.) After that, enable the ffado mixer:

And click “Start”. This should turn on the Firewire connection to your audio hardware. In some audio interface like Focusrite Saffire Pro40, “FW Active” LED will light green.

7.) Switch the main monitor volume of your audio interface to medium.

8.) Let’s use Firefox and go to Youtube to see if the ALSA audio stream will now be routed to JACK. You should be able to listen music coming out of your studio monitors.

Why this will work? By disabling PulseAudio, ALSA will now route audio correctly to JACK then to FFADO/audio interface. If you go again to this path: 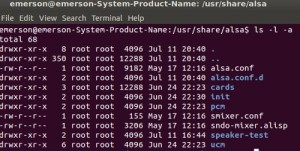 1.) Popular music player such as Rhythmbox will not work. The recommendation is to use GNOME Mplayer that is the preferred player since it will allow configuration of audio output through ALSA or directly to JACK.

Mplayer can also be used when viewing movies in Ubuntu and the audio will work well as long as it properly configured.

2.) There will be some lag, since the audio will still be routed from one place to another. Since this troubleshooting is for playback only, this is not a serious issue.

3.) Other music applications/players might not work unless they are configured to output audio either to ALSA or JACK.

4.) This solution is not perfectly stable and audio will sometimes crash (though not always). You can always close JACK terminal window first and type qjackctl command again. If it cannot be restarted for some reason, it needs a clean reboot on your computer.