Issues when removing the Direct X Plugin and the Solution

Bear in mind that there are lots of open source/free DirectX plug-ins out there in the Internet, you can search it easily in Bing. The problem with these plugins is that they are badly written that can cause some operational issues with its usage. Make sure to check out for some reviews from the users before proceeding to install the plug-in.

Also the worst thing is that the plugin might be loaded with virus, spyware or malware. Make sure to scan your plugin with a reliable antivirus solution. This will ensure that you are not dealing with unsafe plugins.

In Adobe audition 1.5 (I do not know with the latest version), it is not simple to remove the DirectX. I read the documentation and they recommend using third party tools to manage and remove the Directx plug-in such as DXMan. Now this is the reason why VST plugins are so popular compared to Direct-X. It is because you can easily install VST and remove them from your system, while it is harder for Direct X to be removed from the system.

DirectX plugins leaves a footprint in your Windows registry and there is no simple uninstall solution. Below are the complete steps on how to remove a Directx plugin:

1.) Download AnalogX.
2.) Install the software into your computer.
3.) To launch the software, go to Start – All programs – AnalogX – DXMan – DXMan.
4.) What you will see are lists of active DirectX programs in your system found by DXMan. Take note that these DirectX programs may NOT be used by Adobe audition but are used by other programs/software in Windows. See screenshot below: 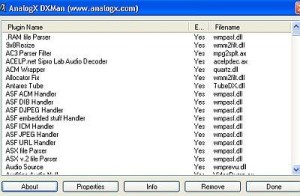 5.) Before you can remove any plug-in, you need to know “exactly” its name. If you are not sure, launch Adobe Audition or Cool edit pro. For the sake of illustration, supposing I will remove “Antares Tube” DirectX plug-in, see below: 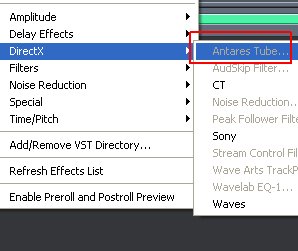 6.) You need to find a Directx plug-in with name “Antares Tube” under DXMan menu. Select on it and then click “Remove” button. See below: 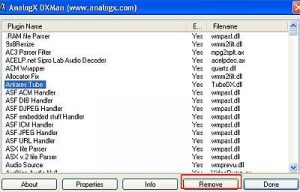 7.) Once removed, click done. DX Man will automatically remove all its information on the Windows registry making the removal of DirectX plug-in very easy and quick. You can as well find more information about any specific DirectX plug-in by clicking “Info” or “Properties”.

WARNING: Double check before you will remove any DirectX programs using DX Man and do not remove any DirectX application you do not surely know. It is because you might accidentally remove some critical DirectX components used by your Windows system and if removed, you Windows OS may get corrupted.

This program does not have any undo feature. You need to manually re-install the removed DirectX application or use your Windows system restore function.

Below are some tips that will prevent any problems when removing Direct-X:

If it does not exactly match for some reason, it is possible that it is not the correct DirectX that you need to remove. Don’t proceed because it can be used by other software.

4.) If you are desperate to have that plugin remove but you cannot clearly locate it on the DX Man software, contact the plugin developer for assistance on removing their plugin. Most likely they are very knowledgeable of the affected DLL files that needs to be removed. You can send them some screenshots of the process so that they can get an idea on how you are removing them.