1.) You need to install LADSPA first. LADSPA stands for “Linux Audio Developer Simple Plugin”. Go to System – Administration – Synaptic Package Manager. Under “Quick Search”, type “LADSPA”. In the result, look for “swh-plugins”. This is called as Steve Harris’s LADSPA plugins. Proceed to mark it and install.

2.) Now you have installed the plugin. It’s time to add it to Ardour so that you can use it in your projects. Launch Ardour first. Go to Applications – Sound & Video – Ardour GTK2.

3.) Try to create a test project with Ardour and then open it.
4.) Import a sample audio wav file. This will be added to first channel.
5.) Go to Window – Show Mixer. You will see your track in it. See screenshot below: 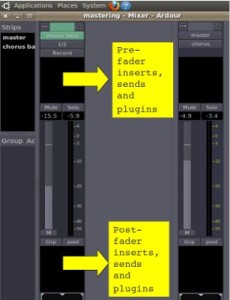 For example in the screenshot, the above track added to the first channel is “chorus bass” and the name of the Ardour project is “mastering”. In the first channel where the first track has been added (e.g. chorus bass); you will see two black areas on the top and bottom. On the top (indicated by yellow arrow), its called the “Pre-fader inserts, sends and plugins”. On the bottom, it is called “Post-fader inserts, sends and plugins”. Ardour works like a software version of real mixing console. If you do not know what are these terms, you should read what are pre-faders, post-faders, inserts and sends.

OK before you can add plugins you should decide if you will add it either in pre-fader or post-fader in that channel/track. This will have a strong impact on the way how you will be handling the tracks. If its added in pre-fader, your fader cannot influence the results of the plug-in. But if the plugin is added in the post-fader, any adjustment in your fader can affect the plug-in.

6.) Supposing you would like to add a plugin in pre-fader region; right click on the black area, then go to “New plugin” – “Plugin Manager”. You will then see all the LADSPA plugins, for example the “Multiband EQ”, “Inverter”, “Flanger”, etc. Supposing you will add a parametric EQ; you can type and search “Parametric” in “Name contains”. And then you will have two choices, namely “Triple band parametric with shelves” and “Single band parametric”. 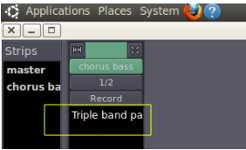 7.) Now its added in the pre-fader, you can start adding settings to the plugin. Double click on “Triple band parametric” under Pre-fader and then you will see its settings menu. Implement any settings you like, supposing you would like to apply a low shelf filter significantly cutting the low bass: 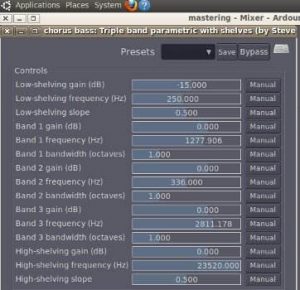 8.) Close it and then play the audio. You will notice that the EQ settings from the plugin will be implemented in your mix. You can add as many plugins as you want either in pre-fader and post fader by following the steps mentioned in this tutorial. Below are the suggested location for the most commonly used plug-ins:

Frequency and dynamic range effects (preferably added in pre-fader)
a.) EQ
b.) Compressors