Now you are working with 24-bit audio, you are now ready to remove the vocals on it. The first step is to split the stereo track to mono. Refer to the procedures below:

1.) Launch Audacity and load the 24-bit wav file that you want the vocals to be removed.

2.) Click the black triangle drop down in your track control tools, and click “Split stereo track”. See screenshot below: 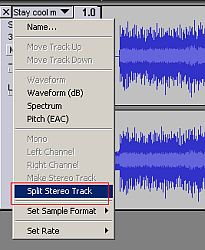 3.) Audacity would then split the stereo tracks into two tracks. Now you need to change them to mono. Click the black triangle again on each track and click “Mono”. Do for both tracks. Below is a screenshot of the split tracks now in mono: 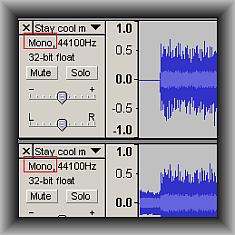 For absolute beginners in digital audio, you can read this tutorial on the difference of stereo and mono vocal recording. Mono is one channel audio while stereo is two channels.

Invert and Apply High pass filter on one channel

Removing vocals works by combining two opposing channels. By inverting one channel and mixing it with the other, commonalities in the center would be cancelled. Vocals are usually panned in the center of the stereo mix so they will be drastically reduced in amplitude and presence due to this cancellation. Although it won’t exactly remove 100% of the vocals as you can still hear the tiny vocal reverb left. This is how removing the vocals from the music should work.

If you are removing certain band of frequencies in the inverted channel; the frequencies removed would be retain after mixing. For example, most vocals are found in this frequency range 300Hz to 3000Hz. If you are filtering 300Hz below which can be done by using a high pass filter (read: What does a high pass filter do? ), then 300Hz below would not be cancelled after mixing and you retain the bass content in the center while removing the vocals.

1.) In the Audacity project where there are two mono waveforms, select the first track only.

3.) After inverting, apply high pass filter on the first channel only. Go to Effect – High pass filter. And then in the cutoff frequency select 300Hz.

4.) Try playing the mix (hitting the Audacity play button). You will notice that the center channels particularly the vocals section are now drastically reduced. It now sounds like a perfect minus one.

5.) This is not yet complete; most users would be creating a minus one version of their favorite song either in WAV or MP3 format.

Go to Edit – Select All. And then go to Project – Quick Mix. This will combine two mono waveforms into one mono waveform. See screenshot below:

mono mix for minus one

It’s not over yet. You need to change the audio format from mono 24-bit/44.1KHz WAV to Stereo MP3 format so that you can play this with your MP3 player to sing along or use this to create an audio CD.

Converting back to Stereo MP3 format

1.) In Audacity, Go to Edit – Select All.
2.) Then go to Edit – Duplicate. There should now be two mono waveforms in Audacity after duplication.
3.) In the black triangle for the first channel change mono to LEFT channel.
4.) Then in the second channel, change mono also to RIGHT channel. This is how it looks like after adjustments (take note of the change from “mono” to either LEFT or RIGHT channel, enclosed in red box) 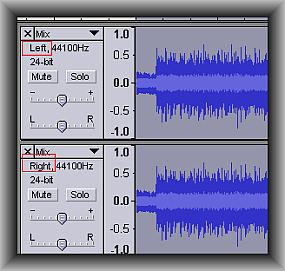 Converted back to stereo

5.) Go to Project – Quick Mix. It will now be rendered back to STEREO format.

6.) To save as MP3, go to File – Export as MP3, assign a file name. If you see some errors in the MP3 conversion process because it ask for a missing file. You need to download lame_enc.dll first to your computer and let Audacity locate it.

You have successfully created a minus-one version of the music (by removing the vocals from the song). This should sound better than any other methods. As an illustration, listen for the differences between the original and the “removed vocal” version:

You can listen to the original MP3 (with vocals) in the license music page (look for “Stay Cool My Friend” track).