Importance of DI boxes in recording guitars and bass

DI boxes are important for getting a great recording sound for guitars and bass. The function of the DI is to convert a high impedance input to a low impedance output. This is necessary for getting a nice sound as impedance miss-match can result to an awful guitar and bass sound.

You need to use a DI box when recording guitars and bass to a low impedance microphone input of the preamp. A common example is the audio mixer microphone preamp XLR input. See screenshot of the sample audio mixer (Behringer Xenyx series): 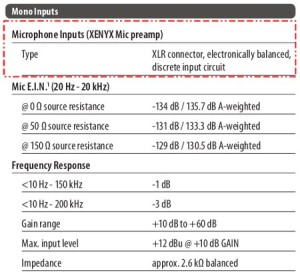 As what you have noticed the mixer preamp requires a low impedance XLR input. Supposing you are recording a passive bass guitar and need to have a strong and clean signal; you can record it as follows:

Passive bass guitar have high impedance but very weak signal output (instrument level signals), so a DI box would convert this to low impedance output suitable for microphone preamps input. And then the preamp would boost it to line level signals. Read this tutorial on difference of line, instrument and microphone levels if you are familiar with these terms.

DI box are inexpensive yet very useful recording gears. One of the commonly used DI box is Pyle-Pro PDC21 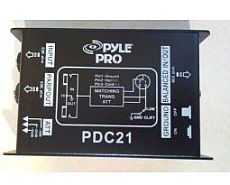 However some audio interface has the capability to recognize instrument level inputs such as Saffire Pro 40. This audio interface has an “instrument” level button that when pressed (see screenshot below in yellow box), it will automatically adjust impedance when a high impedance input is connected for recording (such as a bass guitar).

In this case, you do not need an external DI because the audio interface should handle the impedance matching pretty well. But bear in mind that not all audio interface has this feature.